In the past, the dunes looked after themselves to a certain extent. Mixed cattle, sheep and rabbit grazing slowed down plant succession in the grasslands and dune slacks. Browsing animals controlled the spread of scrub and bracken. Sand blowing in from Sker Beach provided plenty of bare ground for colonisation by pioneer plants. Today much of the site has no cattle, few rabbits and few sheep. The process of plant succession is causing a steady change on the dunes and slacks. Grasslands are becoming thick and tussocky and slacks are becoming bushy with dense layers of moss. Problem species such as sea buckthorn, bracken, birch and wood-small reed Calamagrostis epigejos are spreading. Sand accretion from the beach has almost halted. The few areas of bare sand we have left are maintained by the footfall of our visitors. Pioneer species are declining. Maintaining and re-creating early succession vegetation is a major management objective on the reserve. The work listed below shows the measures we are taking towards achieving our major management objective.
Grazing
The reserve experienced a major change in management in 2006 from open range sheep grazing to controlled conservation grazing using cattle. CCW installed a 3700m fence line enclosing 1.9 square kilometres of dunes on the northern side of the site (about 35% of the reserve). The southern boundary of the fence runs roughly westwards on a line from the M4 fence line near the windsock at SS8053.8250 to the Haul Road near the large blowout at SS7834.8199. It then follows the east side of the Haul Road up north to the River Kenfig at SS7810.8300. The northern boundary is formed by the River Kenfig and the old north-east RailTrack fence line. Contractors started work in January and finished in March. 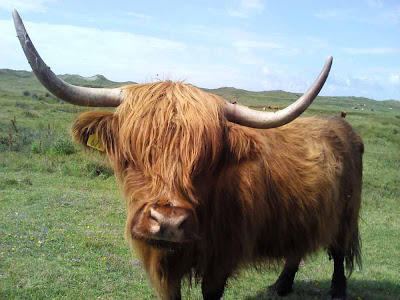 Fifty cattle and their calves are put on in May and taken off in late October, under an agreement with CCW. This is the first cattle grazing since the 1960s. Cattle grazing will continue on the site over future years. About 20 Highland cows were added to the herd in 2009 and these tough individuals stay on the dunes throughout the winter. The impact on the long vegetation has been considerable throughout the enclosure. Reserve staff and volunteers patrol the fence line and repair minor vandalism to the wire, gates, stiles and dog flaps. Vandalism has significantly decreased since the first year. About 300 sheep are put outside the fenceline from the end of October to the beginning of March to try and control at least some of the vegetation on the rest of the site. 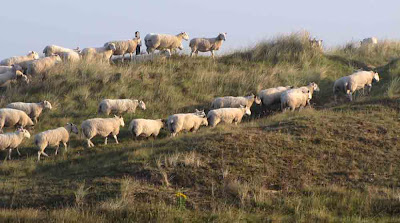 By coincidence, the dunes on Sker Farm also changed to cattle grazing in 2006. An organic herd of Welsh Blacks are put out each autumn and taken off in the spring. Sheep which used to be put out during the summer no longer graze this part of the farm. No grazing apart from a small number of rabbits takes place in the spring and summer.

Scrub Control
Teams of staff and volunteers cut willow, birch and hawthorn scrub during the winter months. Efforts are usually concentrated on dune slacks where any future regrowth from stumps can be cut down with the tractor during annual mowing work. A chainsaw is used to cut the scrub and all material is burned on site. Sea buckthorn has been kept under control by spraying foliage with the herbicide Roundup Pro Biactive. Five annual week-long contracts were enough to get this problem species under tight control. 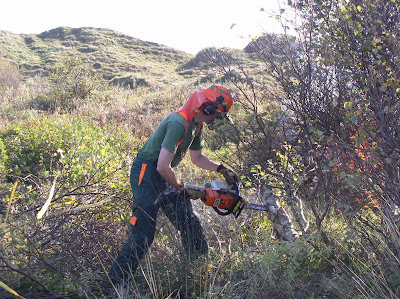 Slack and Grassland Mowing
Mowing and clearance is carried out using a New Holland TL100 tractor. For cutting we use a Perfect heavy-duty flail mower with heavy-duty hammer flails. It is extremely powerful, can be used at relatively fast speeds and chops cuttings into small pieces for easier collection. For collection of cuttings we used a Wessex HTC sweeper/collector machine which uses scarifying blades to throw cuttings into a collection box which is tipped, when full, using hydraulic rams. Cuttings are left in a pile next to each grassland or slack. This is the most expensive implement both to buy and run. The collection of cuttings is a slow task when compared with the initial cutting. It involves difficult maneuvering to tip the contents of the collection box into the correct place. It takes 2-3 times as long as the initial cutting. 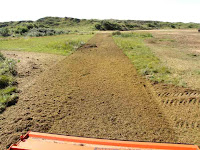 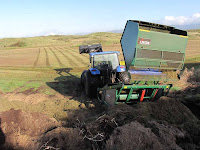 The tractor, its mowers and other implements were purchased in 2008 following a donation from our neighbour, Tata Steel who champion fen orchid conservation. They replaced a Ford 5030 tractor, Desvoys 4235 flail and Wessex HTC sweeper collector that had been in use since 1997.

Bare Sand Creation
Six attempts have been made to create bare sand for the colonisation of wet sand pioneer plants. All were in slack habitats that had become heavily vegetated. In the first two, our tractor with a front-mounted silage grab was used to pluck turfs from the ground and pile them to the side of the rejuvenated slacks. The first which was created in 2001 measured about 30m by 20m and the second, created in 2003, was 50m by 50m. The work was reasonably successful with pioneer species such as brookweed Samolus valerandi and jointed rush Juncus articulatus soon appearing. The rare liverwort petalwort Petalophyllum ralfsii was found in the spring of 2006 in the larger slack. This is now the only know site on the reserve for this species. 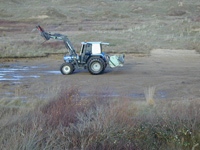 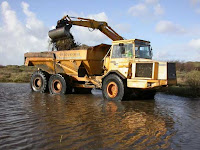 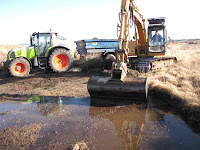 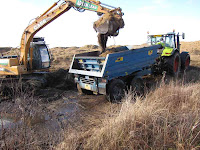 The success of these early works has led us to include slack scraping as a regular part of our management work whenever funds become available.

Kenfig NNR is a large coastal dune system near Porthcawl, Bridgend. It hosts a variety of coastal habitats including wetlands, dune slacks, the River Kenfig and Kenfig Pool. The reserve is open to visitors year round and car parking is free. A visitor centre provides toilets, shop and exhibitions.

Email pictures etc for the blog to webmaster