Dune slacks are the low-lying flat areas between sand dunes. During the winter and spring many slacks at Kenfig flood but as they gradually dry out in the summer, a special and rare plant community grows which includes many orchids. People travel from far and wide to see Kenfig's slacks in the summer and we probably have the wettest and largest area of slacks in the UK. Their flatness looks somewhat un-natural but humans have had nothing to do with creating their profile. During periods of high sand mobility in the past, wind would have blown dry sand downwind, gradually lowering the ground level until the water table was reached. Wind cannot move damp sand so the base of the slack surface matched the flat water table. As the water table rises during the winter, the slacks flood. The slacks are particularly wet at Kenfig because a layer of boulder clay beneath the sand prevents ground water from being lost into the ground below. Instead the water table rises and slowly seeps through the sand off the dune system and into the River Kenfig to the north and onto Sker Beach to the west. 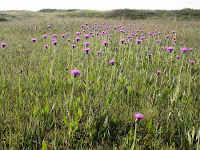 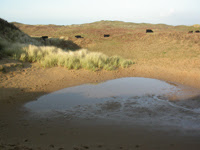 Newly formed slacks consist of bare damp sand with a few specialised plants which are able to colonise and survive in the difficult growing conditions. With time, more plants are able to grow as a thin soil slowly develops until the sand is completely covered with vegetation. Eventually, a thick covering of vegetation forms and wetland trees such as willows and birches begin to take over. Currently at Kenfig most the slacks are heavily vegetated and bare slacks are rare. Efforts are made to slow the rate of plant succession by mowing and removing the cuttings from several slacks and on some parts of the site, by grazing with cattle.

Kenfig Pool is a 70 acre freshwater lake which is mainly rainfall fed and therefore unpolluted. The water is relatively low in nutrients compared to most lowland lakes, technically termed as meso-oligotrophic (medium to low nutrient levels). This lack of nutrients makes conditions difficult for algae to grow and the water remains clear. The surrounding sand which is full of shell fragments leaches dissolved calcium into the water making it rich in calcium and giving it a high pH (opposite of acidic). These qualities are unusual and many of the plants that grow in the lake are rare. In particular the extensive beds of stoneworts growing on the sandy shallows are special as stoneworts are quick to disappear in lakes polluted with nutrients. 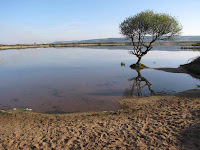 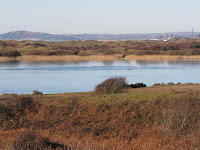 The eastern shore is open due to grazing pressure from farmland next to the lake but all the other shores have reedbeds and seasonally flooded willow woodland which have developed since cattle grazing ceased on the dunes in the 1960s. The lake has slowly moved west as the east shore erodes and the west shore builds up detritus from the tall vegetation. The remains of an old stone wall can be seen in the shallows on the south-west corner and the ruins of an old boat house that used to be much closer to the bank can be seen in the north-east corner.

Once sand becomes stable, the gradual process of plant succession starts to take place. Early pioneers are able to grow on little more than sand and water. The conditions are very difficult for growth with desiccation during dry weather and inundation from wind-blown sand killing most plants. However, some have physical properties to allow them to survive the extreme conditions. A good example is Marram Grass Ammophila arenaria which can curl its leaves to reduce evaporation from its stomata and can grow at remarkable speed to keep its leaves above accumulating sand. With time the suite of pioneer species begin to give way to plants better able to cope with more stable conditions and a thin water retaining soil. The fixed dune grassland communities can be very rich in species although the notion that these grasslands have stable plant communities is not true. During a period of wet summers, grasses and tall vegetation can become dominant but a period of dry weather in the summer on these thin sandy soils can be disastrous to several of these species. This provides an opportunity for drought tolerant plants and species adapted to grow in bare patches to become common again. Therefore, even fixed dune grasslands are always in a state of change. 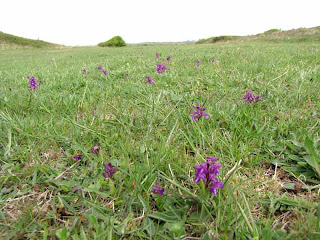 Grazing also has a profound effect on the dune grassland community. Rabbits can keep the vegetation very short and maintain patches of bare ground through their digging activities which can maintain a diverse assemblage of bare ground specialists and short growing plants indefinitely. At Kenfig rabbit numbers have been low for about 40 years and short turf is rare, the successionally young plant communities are restricted to the tops of south-facing dune faces and the sides of paths where foot erosion maintains the short turf and bare sand. Some of the mowing work is also carried out on dune grassland to maintain species richness in the absence of grazing and the results have been good although bare patches do not get created for annual species to colonise. Fixed dune grassland is the main plant community at Kenfig and its main management issue is under-grazing.

Kenfig NNR is a large coastal dune system near Porthcawl, Bridgend. It hosts a variety of coastal habitats including wetlands, dune slacks, the River Kenfig and Kenfig Pool. The reserve is open to visitors year round and car parking is free. A visitor centre provides toilets, shop and exhibitions.

Email pictures etc for the blog to webmaster